Hurricane Proof Fencing: Finding Fencing That Can Take a Beating

Not too long ago, a storm came through and knocked my power out for a few days. She also toppled nearly every fence in the neighborhood, and while it was interesting to discover how many people had classic automobiles rusting away in their backyards, the loss of fencing in the neighborhood had other effects as well.

The morning after the storm, pets were released to relieve themselves in their owners’ yards, and dogs from pugs to poodles ran over the fallen fences, tongues lolling with a canine cry of freedom. Many of the fences’ wooden posts had rotted below the ground, and when the wind picked up, the posts snapped. Now, there is no guaranteed hurricane proof fencing. Conditions around a hurricane can vary wildly and are sometimes extreme enough that nothing stays standing for long. The fencing that comes closest, though, is also the best fence for windy areas  in general, and it has one or the other of two important features: a vertical surface that lets the wind pass through, or posts that don’t rot.

There are a few ways to keep wooden fence posts from rotting beneath the ground. The simplest is not burying the wooden post itself, but instead anchoring the post to a buried object. There are several ways of doing this; some have been around for awhile, and others are completely new.

Fences with rot-resistant posts will last longer, and are more likely to stay standing under any circumstances. However, when it comes to a hurricane, your traditional wood privacy fence is unlikely to survive high winds intact no matter how sturdy its posts are. It simply catches too much wind to withstand a big storm. In the versions with steel posts, the screws holding the brackets to the rail can pull loose. When post anchors and footers are used, the rails may be pulled loose from the posts, or the pickets may come loose from the rails. That’s why a true hurricane resistant fence has to allow the wind through.

Fencing That Doesn’t Catch the Wind

The pickets on traditional six-foot-high wooden privacy fences are fitted edge to edge to keep people from being able to see easily into the yard. This creates the perfect catch for the high-speed winds, as the fence acts a sail to create powerful forces that can take down the fence. These fences don’t always completely collapse, though. Sometimes the pickets are stripped off the rails, which is what happened to several vinyl fences in my neighborhood. In one case, a flying vinyl picket tore through the screen on a screened-in porch, causing much more hassle than if the fence had just fallen over.

In my area, those who had opted for wrought iron-look fencing saw their fences come through the storm mostly intact. The reason for this is that your typical metal fence, whether in steel or aluminum, has narrow pickets that let the wind through instead of catching it. Steel fences of this sort also have a strength advantage, and when something like a flying piece from a broken PVC fence comes at it, it won’t be damaged. Most aluminum fences, however, will be dented by heavy debris.

Fences that allow the wind to blow right through can at least keep a dog in the yard the morning after the storm, which is an advantage for those who want to pick up hurricane debris rather than learn parkour while chasing a dog. Unsurprisingly, sturdy steel picket fencing is also the best fencing for dogs that jump and climb as well as for those in hurricane-prone areas. However, picket security fences don’t provide a lot of privacy, and that is something people want in their backyards. After all, you may need to hide a car that has been under restoration for over a decade. But when it comes to privacy fences and hurricane winds, things get complicated.

In privacy fences, there is no one-hundred-percent hurricane proof fence. The winds from a big hurricane are simply too strong for an uninterrupted vertical surface that is lighter than a brick wall to remain standing with absolutely no damage. The storm that threw a tantrum in my neck of the woods actually knocked a few cinder block and brick walls down. But it’s a reasonable request that a privacy fence keep its basic structure intact and still be a functional fence after the storm. There’s one sort of privacy fence I know of that fits this bill.

Fences that mix steel frames and wooden privacy pickets are as close to hurricane proof as privacy fences get. These are not to be confused with wooden privacy fences that have steel posts. Rather, these are privacy fences with steel verticals and top and bottom rails forming an integrated steel frame. Wooden pickets attach to this frame to provide privacy. While it is possible, in strong storms, that some of these pickets will break in the wind, the overall structure should remain intact and continue working as a fence afterward. Broken privacy pickets can be replaced in this fence easily and without the need to take out rails or nearby pickets as well (as is often the case with a traditional wood privacy fence). The additional steel between the rails, as well as on the perimeter, provides greater strength for the panel during the storm and keeps pets in the yard even if every wooden picket gets blown out.

An example of a fence like this is the Estate ornamental fencing by Fortress Building Products. The Estate Fence is a wrought iron fence with fully-welded panels that include metal pickets and posts, with the option of adding wooden or composite boards for privacy. This is a unique combination fence that is durable enough to survive a disaster, provides privacy on peaceful days, and looks good during both. It’s protected with a unique layer of coatings--pre-galvanization, a zinc pre-coat, an e-coat, and a powder coat--designed by Fortress to prevent corrosion even in the worst conditions. This is one of many thoroughly built and thoughtfully engineered outdoor products from Fortress Building Products. If you’re looking to install or distribute sturdy, hurricane-resistant Fortress fencing where you live, get it touch with us. 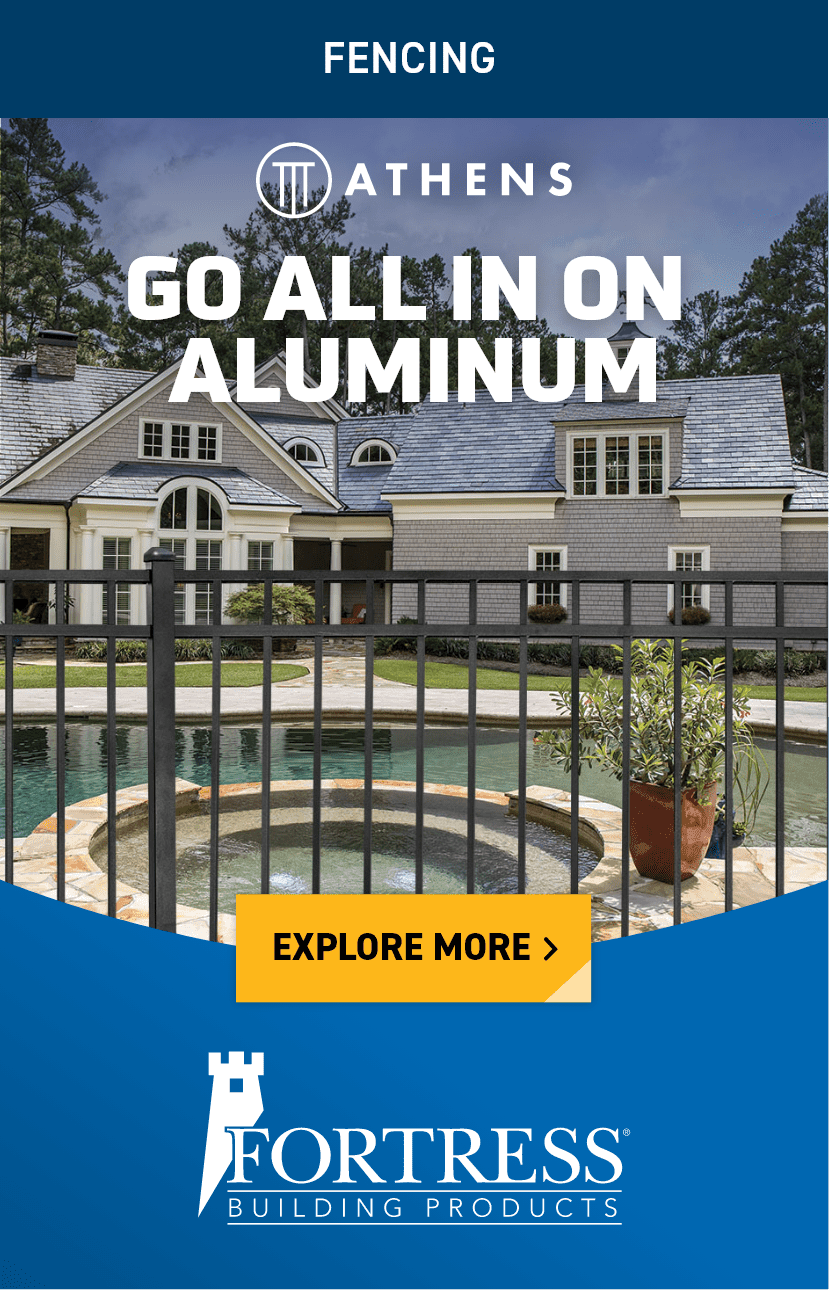