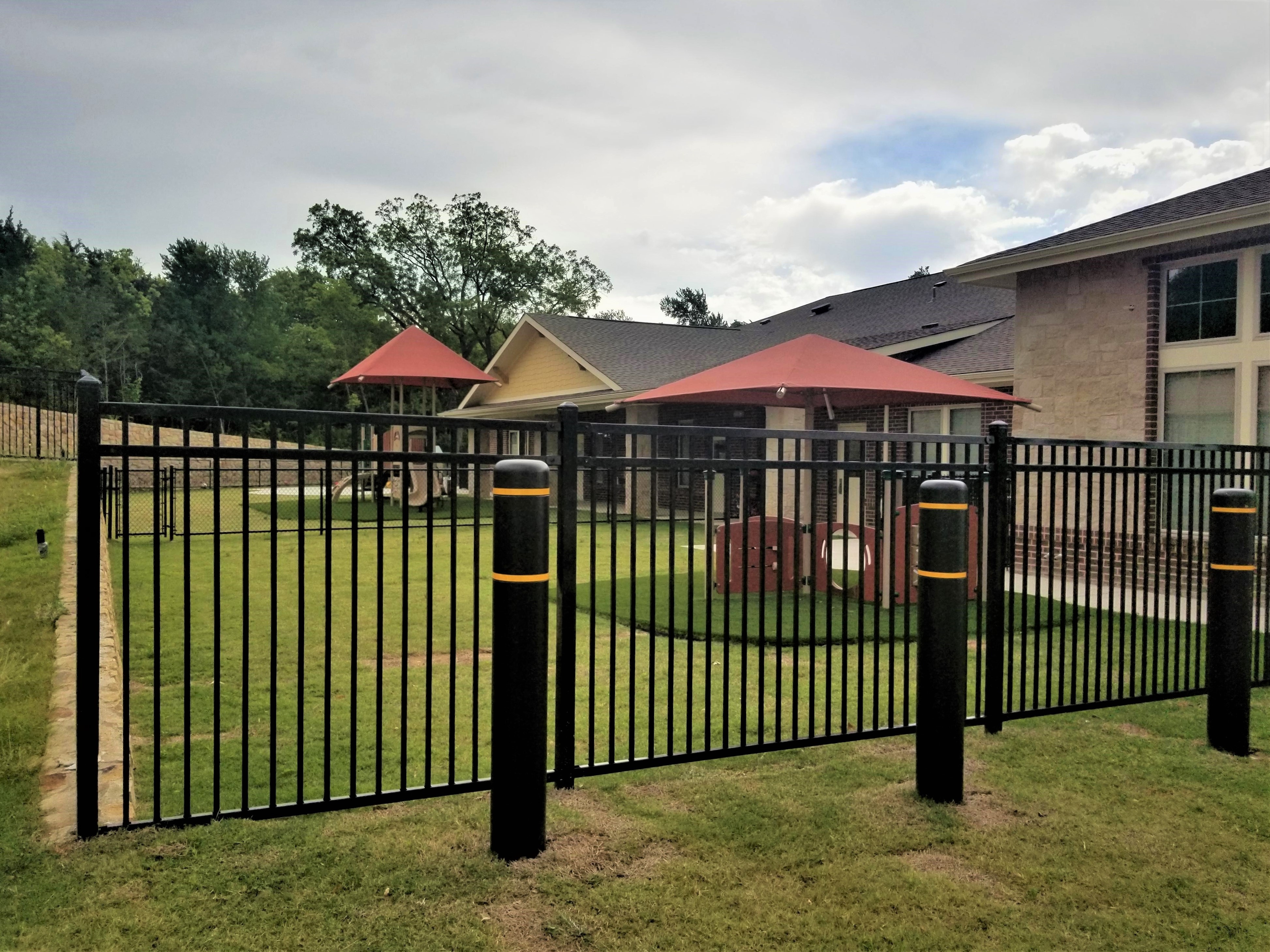 Located on the Northeast outskirts of the Dallas-Fort Worth metroplex is the budding community of Rockwall, Texas. Known as a great place to raise a family because of its suburban hometown feel, Rockwall is home to a Kiddie Academy Education Child Care center.

Through the back doors of the Rockwall Kiddie Academy, children, parents and caregivers find a playground decked out with climbing walls, slides and welcome sunshades to shield youngsters from the intense Texas sun. However, upon closer examination, one could clearly see that the playground’s surrounding chain-link fence was well past its prime.

To protect children in their care and offer parents peace of mind, Rockwall Kiddie Academy owners consulted American Fence of Dallas. The local fencing contractor was tasked with sourcing a high-performance, high-value fencing replacement to enclose the open-air playground.

To meet this challenge, American Fence of Dallas opted for V2 ASSURANCE commercial ornamental fencing from Fortress Building Products. This smart perimeter solution yields a 3-inch air space between pickets, which offers increased safety in areas where kids play. Coupled with its enhanced durability and modern aesthetic, these fencing panels are well-suited for securing commercial properties such as the Kiddie Academy.

“One of the chief reasons the project team opted for V2 ASSURANCE is because of its 3-inch air space,” explained Dan Madden, Business Development Manager, High Security, Fortress Building Products. “A narrow air space improves system security, preventing small humans from weaseling over, under or through the fence.”

V2 ASSURANCE does more than play it safe with its narrow air space. It meets and exceeds playground fence regulations. Section 6.1.0.8 of the ASTM F2049-11 building standard mandates that openings in a fence enclosing an outdoor play area be no larger than 3.5 inches to effectively contain children, prevent injuries and discourage climbing.

“What’s more, the restricted air space pairs nicely with the system’s sleek aesthetic without hindering visibility beyond the fence line,” adds Madden. “Academy instructors and parents experience peace of mind because they can see clearly through to the other side of the perimeter.”

To not compromise appearance for system security, the fencing solution incorporates a flat top and flat bottom profile for a handsome, contemporary look. No picket-to-rail connection points add to its sleek appearance. Installed around the perimeter of the Rockwall Kiddie Academy playground, V2 ASSURANCE certainly offers a positive first impression of the early learning center.

V2 ASSURANCE pairs with bollards for an economical safety solution

Upon installation of the fence panels, the project’s general contractor opted for the addition of safety bollards. Compatible with V2 ASSURANCE commercial ornamental fencing, safety bollards are often used to protect people and property from accidental damage caused by vehicles. To implement this added safety measure, crews positioned basic steel bollards between the newly installed fencing solution and the academy’s highly trafficked parking lot. The posts were cemented in the ground at 48-inches apart.

In addition to providing added protection in the instance a stray vehicle jumps the curb, layering the bollards in front of V2 ASSURANCE proved to be a cost-effective, viable alternative to its more expensive crash-rated designation counterpart.