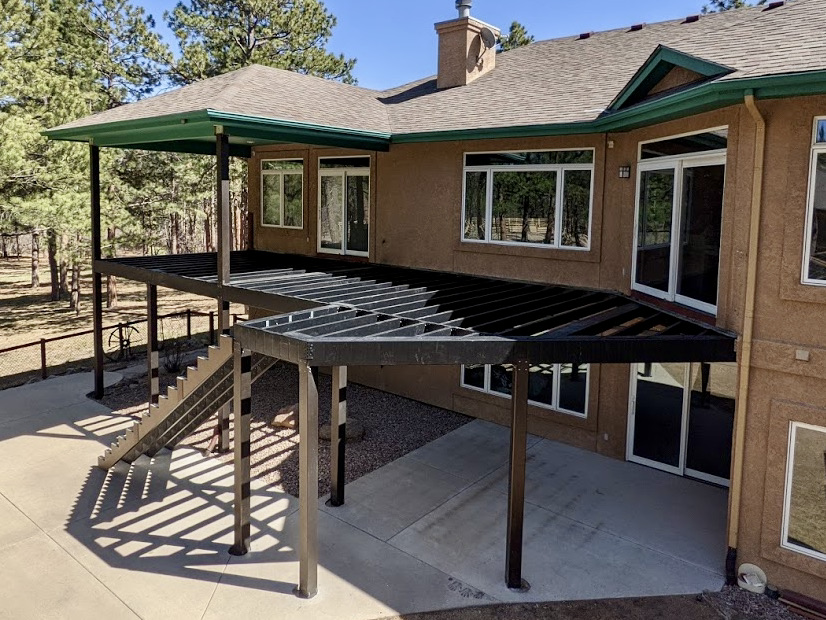 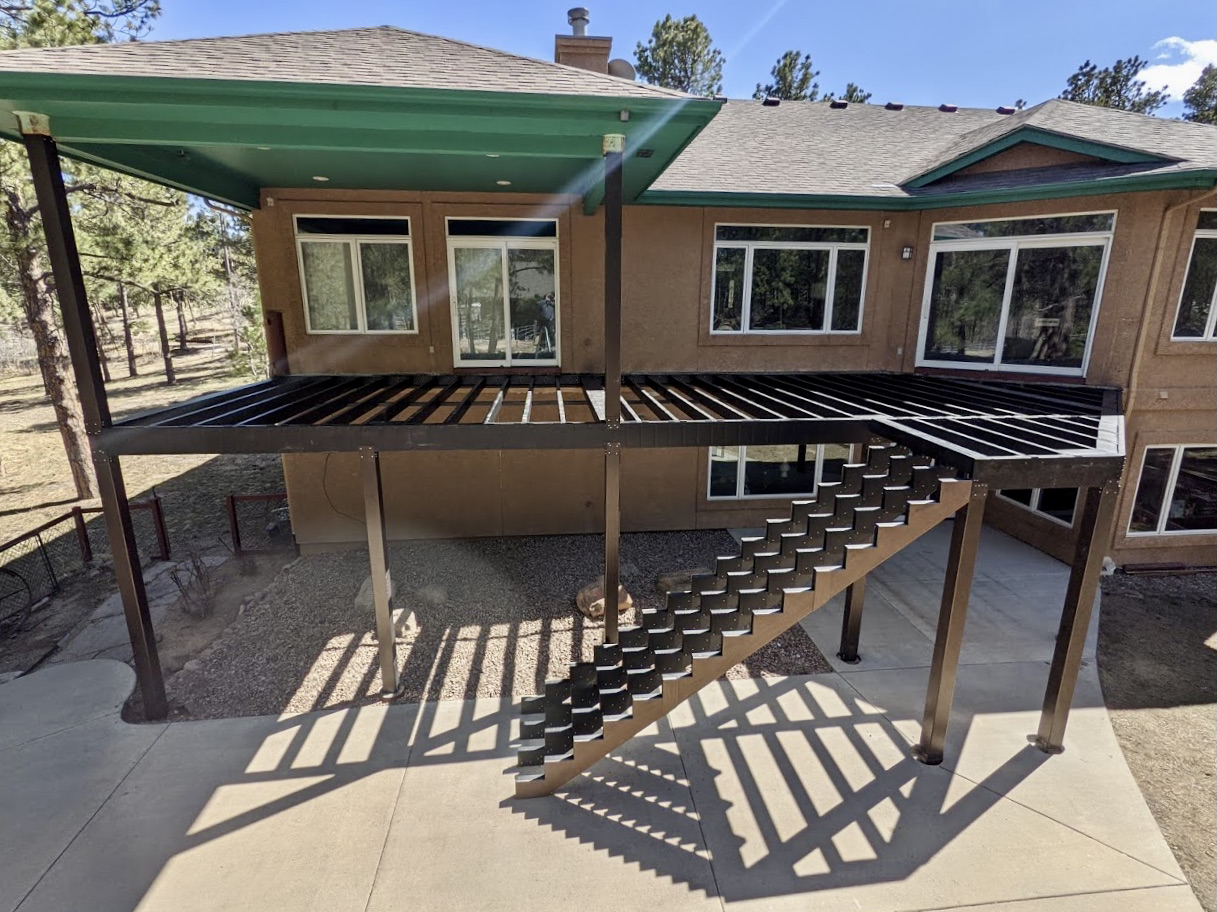 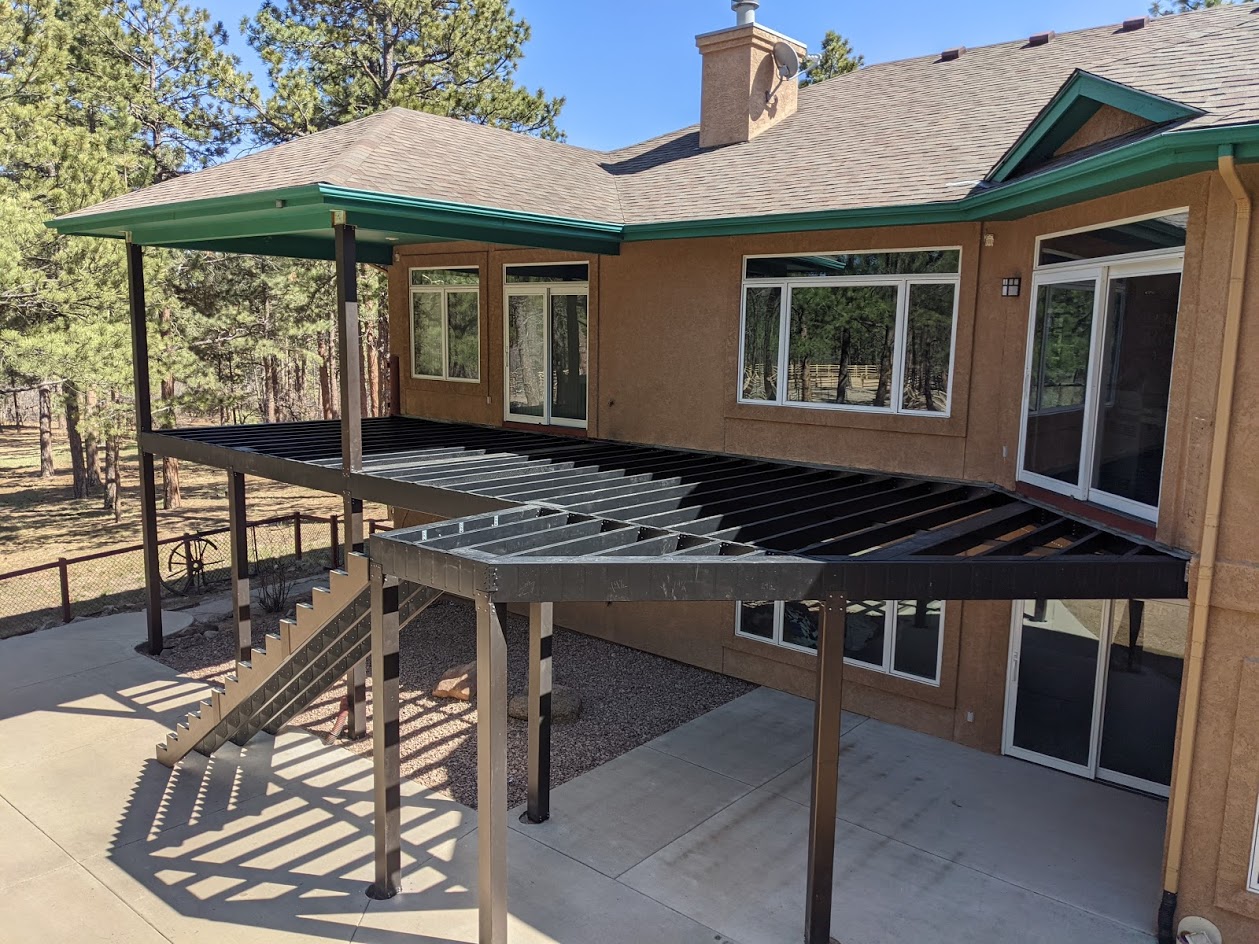 Philip Purdy has put many miles on his truck over the years. After all, his deck building business, StoneCroft Construction, services the more than 2,000 square miles of El Paso County, Colorado’s mountainous terrain.

“Commercial builders have relied on steel for decades,” says Philip. “So, it only makes sense that we employ it across residential applications as well. After all, we know how steel will behave over time.”

In the Southern Rockies, where StoneCroft Construction is based, wood is exposed to dramatic fluxes in temperature and extreme weather conditions. The dry heat of summer, paired with the wet, cold of winter, can wreak havoc on wood frame decks. It’s not uncommon for typical builder grade decks to begin showing signs of deterioration after long-term exposure to moisture or begin warping as a result of drastic changes in temperature. These issues can have a detrimental effect on critical places like stair stringers and support beams. “Framing with steel seems to sideline these problems,” says Philip.

An ideal building material for deck framing projects, light-gauge steel capitalizes on the strength and durability of commercial-grade steel. Framing with this high-performance building material eliminates many of the issues associated with moisture absorption, one of the most common reasons for lumber decomposition. With this peace of mind, deck builders don’t have to worry about leaving the steel profiles unattended on the jobsite. This frees up much of the day, as there’s no need to frantically shield the material from a sudden rain or snow shower (a common occurrence in Philip’s world).

In fact, steel is resistant to most tangible threats, including rot and decay, fungi, pests (such as termites) and weathering. In application, this means light-gauge steel frame profiles will remain straight and true over time. This makes for an enduring, dimensionally stable deck framing solution that keeps surface boards flat and smooth underfoot.

Steel profiles also allow for greater spans on the beams and joists. This equals more usable space underneath upper-level decks, as fewer posts are required. An added plus for Southern Rockies residents is that the steel profiles aren’t just functional, they’re also sleek and good looking. “Evolution is aesthetically appealing in its Black Sand powder coating, so my customers often want to leave it as a fascia for a slightly rustic industrial look,” adds Philip. For increased design flexibility, Evolution is compatible with any type or brand of deck board so that customers can enjoy an outdoor living space that reflects their personal design aesthetic.

With steel deck framing in his repertoire, Philip and his crew at StoneCroft Construction have never been more ready for the fast-approaching mayhem that is deck building season. More building professionals may be following suit. While lumber prices remain volatile, homeowners’ fervor for outdoor and home improvement projects shows little sign of slowing down. The surge in demand for building materials paired with astonishingly high lumber prices has decidedly influenced many building industry professionals to also consider readily available building alternatives like steel.

Pros who are relatively new to framing with steel will appreciate how Evolution supports “a straightforward deck building process,” says Philip. The system’s steel profiles arrive on the job site straight and true, meaning a crew won’t waste precious daylight hours sorting through a heap of lumber to find perfect boards. The comprehensive framing system also includes an intuitive ledger and convenient joist lengths, and installs quite similarly to lumber. Its components/brackets fully integrate with Evolution steel deck framing or traditional wood deck framing for added convenience and design flexibility. Builders can take additional “steps” towards ensuring the integrity of a deck system by integrating the Evolution steel deck stair system into a project. Steel frame decks with a compatible staircase eliminate safety challenges associated with wood frame decks, like poor stringer-to-deck connections and inconsistent rises and runs. These freshly introduced steel stair components and brackets make it possible to marry decking framing and stairs for one unified build.

Engineered to last as long as today’s most enduring composite and PVC surface boards, framing with Evolution steel deck framing will keep deck structures standing strong for 25 or more years, safeguarding legacy of work. “For us, there is no turning back,” adds Philip.